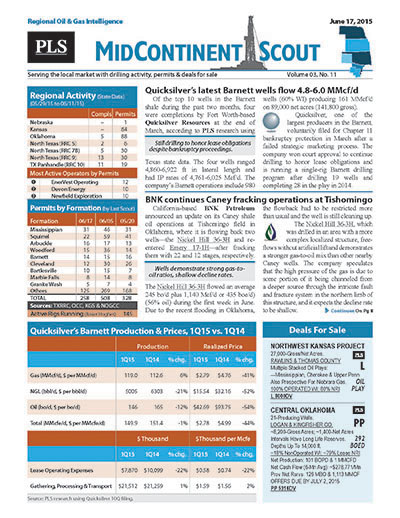 See what it is about before you buy. View a sample issue of MidContinent Scout.

Opportunity is a reflection of information.
Call 713-650-1212 For More Information
Search MidContinent Scout:

Headline
Publication
MCS - Trinity sees improved Woodford IPs with shorter laterals - January 15, 2020
One of the largest private operators in the US, Trinity Operating has focused its activity on the Eagle Ford and Midcontinent. The company’s Midcon holdings are primarily a gas play in the Woodford formation. As of the end of October (the latest data that has been released by Oklahoma regulators), the company had completed 48 horizontal Woodford wells during the first 10 months of 2019: 22 in Pittsburg County, 13 in Hughes County, nine in Haskell County and four in Coal County. Effective...
Midcontinent Scout

MCS - Revolution Resources Highlights - January 15, 2020
Revolution Resources completed its $201.5 million acquisition of Oklahoma driller Jones Energy, whose shareholders received $14.06 cash for each Jones Energy Class A common share or Jones Energy Holdings II unit. The final consideration was down slightly from $14.11 reported in the Dec. 6 deal announcement. Now a wholly owned Revolution subsidiary, Jones exited Chapter 11 in May with a $225 million borrowing base agreement after filing for bankruptcy in April. According to a March 6...
Midcontinent Scout

MCS - Mississippian initial productivity sees boost in 2019 - December 31, 2019
While drilling activity in Oklahoma has taken a dive in the last year—there are 60 active rigs in the state as of Dec. 30 compared with 149 a year ago—initial well productivity is improving. For example, new production per rig in the Anadarko Basin in January is expected to be 625 bo/d and 4.2 MMcf/d compared to 410 bo/d and 2.9 MMcf/d in January 2019, according to the US Energy Information Administration. In the first nine months of 2019 (data is not yet available for Q4), the Mississippian...
Midcontinent Scout

MCS - Thai miner to become top Barnett producer in $770MM Devon buy - December 31, 2019
Devon Energy announced the final stage of its transformation into what it calls a “New Devon” Dec. 18 with the $770 million sale of its remaining Barnett shale assets in North Texas. The buyer is BKV Oil & Gas Capital Partners LP, an investment vehicle of Thailand-based coal mining and power generating company Banpu Pcl set up through its Denver-based affiliate Kalnin Ventures to acquire US natural gas assets. This is BKV’s seventh transaction since 2016 and marks its debut in the Barnett,...
Midcontinent Scout

MCS - Raven Resources Highlights - December 31, 2019
Raven Resources retained The Oil & Gas Asset Clearinghouse to market 328 net acres of undeveloped leasehold in Dewey and Blaine counties, Oklahoma, with an additional 88 net acres available (Enverus Deal ID: 12102). There has been heavy offset permitting and drilling in the Mississippian and Woodford, with 170 horizontal wells drilled in these formation over the last five...
Midcontinent Scout

Get more news for MidContinent Scout