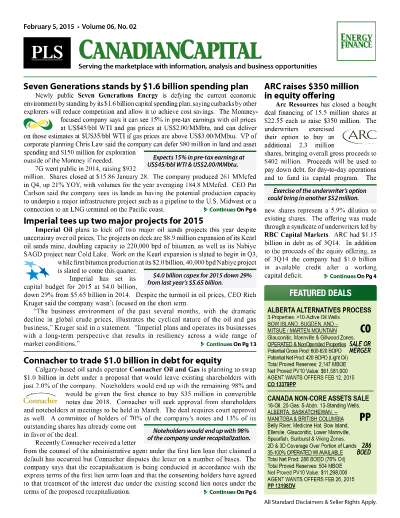 See what it is about before you buy. View a sample issue of CanadianCapital.

Need more information? Click the button to recieve more details about the CanadianCapital

Opportunity is a reflection of information.
Call 713-650-1212 For More Information
Search CanadianCapital:

Headline
Publication
Capitalize shows Canadian underwriting activities slow in 1H18
Canadian banks and brokers earned $141 million in fees for total allocations of $24.26 billion in connection with equity and debt offerings, credit facilities and loans for the oil and gas industry during the first half of 2018, according to data compiled by PLS’ Capitalize platform, and two banks—RBC Capital Markets and Scotiabank—were among the Top 10 of all 171 underwriters. While a small portion of the underwriting took place for Canadian companies, all companies tracked by...
Canadian Capital

IOCs take interest in Canada as world oil prices rebound
A gradual rebound in world oil prices over the last few months has led to a small resurgence in interest from international oil and gas companies, who have started to invest again in Canada. ConocoPhillips and Petronas, both of which sold assets within the last two years, have reinvested in the region as prices have rebounded. The international exodus started in October 2016 after the decline in world oil and gas prices made international oil companies skeptical of the high costs of...
Canadian Capital

Industry optimistic about $40 billion capex at Kitimat
A final investment decision for the fate of the Kitimat, B.C.-based LNG Canada project is looking better than it has been in a long time, judging by activity in the area, the re-entrance of Petronas to the Canadian LNG market and new contracts. The $40 billion FID is the decision of project lead Royal Dutch Shell and partners PetroChina, Mitsubishi and Korea Gas Corp., as well as Malaysian NOC Petronas, which took a 25% stake in May after dropping its own Pacific NorthWest LNG project last...
Canadian Capital

Ikkuma to fund exploration, reduce debt after asset sale
Ikkuma Resources sold midstream assets in the Alberta foothills for $30 million, including 23 million in readily available cash. The company plans to use proceeds from the asset sale to pay down debt and to finance capital expenditures required through the issue of its CEE flow-through shares. In September, Ikkuma issued 15.1 million CEE flow-through shares for $0.82 each, generating proceeds of $12.4 million. Under provisions of the Income Tax Act, Ikkuma is obligated to spend $12.1...
Canadian Capital

Canada’s debt, equity markets slow in summer
Canada’s Capital markets are in the summer doldrums, with relatively few large debt or equity issues over the last three weeks, although there are a series of smaller ones. The largest debt issue is Transcanada’s decision to sell up to $1.0 billion in debt for redemptions and working capital (PG 1). Other significant debt issues include Superior Plus Corp.’s decision to issue $615 million on U.S. and Canadian debt markets (PG 12). Pine Cliff Energy offered $19 million in...
Canadian Capital

PetroShale to raise up to $58.5MM for Bakken purchase
PetroShale Inc. announced plans to raise up to $58.5 million through two private placements to fund its acquisition of additional North Dakota acreage. The first issue, which consists of the sale of 21.6 million subscription receipts for $1.85 each, would raise up to $40 million. The underwriters, led by Haywood Securities, have a 30-day underwriters overallotment option to issue up to 3.2 million subscription receipts to raise another $6.0 million. Concurrently, the company is holding...
Canadian Capital

People Briefs - July 19, 2018
AltaCorp Capital has named Jon Horsman as its new chairman and CEO. Horsman previously served as the co-head of parent ATB Financial’s Corporate Financial Services team. He takes over from Paul Sarachman, who had been serving as co-CEO since late 2017. Sarachman remains president of AltaCorp. Drakkar Energy and Blacksteel Energy announced a change in management after the two companies complete their announced reverse merger. Keith Macdonald, Chairman and President of privately-held...
Canadian Capital

Get more news for CanadianCapital