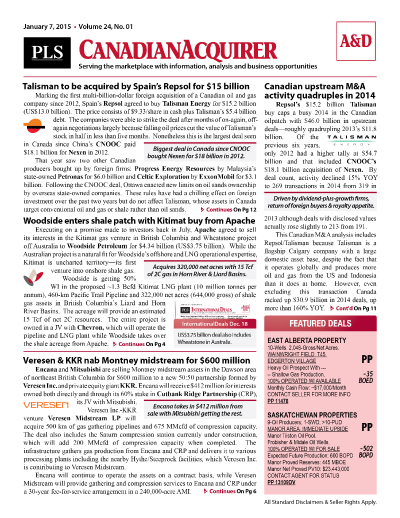 See what it is about before you buy. View a sample issue of CanadianAcquirer.

Need more information? Click the button to recieve more details about the CanadianAcquirer

Opportunity is a reflection of information.
Call 713-650-1212 For More Information
Search CanadianAcquirer:

Headline
Publication
CS - Active rigs in first two months of 2020 were up over 2019 - March 2020
Through the first two months of the year, Canada’s rig count has shown a moderate improvement over 2019 in terms of the absolute number of active rigs. According to Baker Hughes data, the highest rig count in the two-month period was 257 compared to 243 in 2019. During the first week of January, 85 rigs were working compared to 76 at the same time last year. According to the Canadian Association of Oilwell Drilling Contractors, the January rig utilization percentage was 48.38% compared...
Canadian Acquirer

CS - Crew’s ultra-condensate Montney wells outperform at 1,300 boe/d - February 2020
Crew Energy may need to revise its expectations for its “ultra-condensate-rich” Montney acreage at Greater Septimus after it again exceeded expectations in Q4, this time with its four-well 3-32 pad. The four wells had an average lateral length of 3,000 meters and incorporated completion design improvements that reduced completion costs by 26% to $3.8 million per well, or $1,278 per lateral meter. During the last six hours of a 19- day production test, the wells flowed at restricted rates and...
Canadian Acquirer

CS - Yangarra lowers capex to $105MM, focuses on Chedderville - February 2020
Thanks to accelerated spending that enabled Yangarra Resources Ltd. to drill and bring online three additional wells late last year, the company has lowered its 2020 capex budget to $105 million from $120 million. It is keeping production guidance in the 14,000-15,000 boe/d range, which at midpoint would represent 16% growth from 2019’s 12,550 boe/d average. Spending in 2019 amounted to $121 million. The company said it had planned to drill and complete 24 wells last year, but it...
Canadian Acquirer

Amherst racks up 12,000 acres since 2017 formation
Privately held, Calgary-based Amherst Energy has acquired ~12,000 acres of mineral leases since its formation in February 2017. The position covers six oil prospect areas: Morgan, Lloydminster, Leo, Thorsby and Provost in Alberta and Lashburn in Saskatchewan. The prospects are targeting a combination of heavy and light oil.Amherst has identified 111 potential locations on its existing holdings and plans to begin development operations in Q4.An independent evaluation of the acquired...
Canadian Acquirer

Orca Exploration provides update to the Swala transaction
Toronto-listed Orca Exploration Group indefinitely extended the date by which Tanzanian company Swala Oil & Gas could make the second and third installments of its investment in Orca sub PAE PanAfrican Energy Corp.The move comes after Orca initially extended the closing of the two tranches to June 30, which had required a $130 million investment by that date. Per the July 16 update, the company retains the right to terminate the extension at any time. The first tranche comprised...
Canadian Acquirer

Get more news for CanadianAcquirer